This year, I decided to celebrate by doing what I love, rather than having a party or gathering.  I spent my birthday with my family in Los Angeles enjoying good, though not pricey or fancy meals.  The rest of the week was dedicated to dance.

I got back into town Saturday afternoon.  Sunday, I had Bruno Mars flash mob performance day and a master workshop with the Hamilton choreographer(Taking my shot.) Monday was my weekly Beyonce Run the World choreo class. Tuesday, after 3 long weeks, was a return to my samba no pe workshop. The objective for that night’s lesson was endurance so we danced samba no pe nonstop for an 8 minute song, 7 minute song, and a 5 minute song, etc. (My calves and feet felt that for days!) Wednesday I had the privilege of seeing The Revolution on their reunion tour honoring Prince. They gave a show that was 100% wonderful. I was in the general admission standing room section, one row back from the stage, where we danced and sang along all night.

By that Friday, I needed a break. I had a ticket to Morning Mashups with Daybreaker but slept in instead. The thought of getting up before 7am on a Friday to commute to San Francisco to dance for a few hours was not appealing. My #summerofdance was not the best time to start training for a half-marathon.  My joints are indeed 45.  It’s important to listen to my body and get adequate sleep.  This is a work in progress.  With my job change, honoring my health will be crucial.

My #summerofdance not only brought me great joy but it helped me rediscover downtime.  I don’t need to go, go, go to remain stable and happy.  45 is a good year.  I am committed to keeping it so. 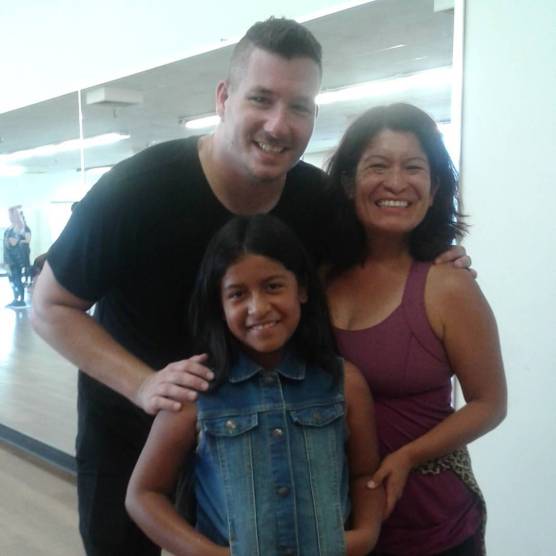 The Sunday after my 45th birthday was a day filled with dance.  My day began with Bay Area Flash Mob.  We performed our Bruno Mars medley at several locations in San Francisco. Due to Carnaval preparations and end of school year busyness, I only attended a few classes in preparation. But I was on a mission to be part of a special performance for a wedding anniversary and the flash mobs.  I practiced on my own and did extra rehearsals with my group. After four performances, it was time for a workshop opportunity through Pop Star Booty Camp.  I had my shot to learn choreography from Hamilton’s resident choreographer Derek Mitchell.

What I loved about this session was how our teacher explained the intent of the movements. It was Method dancing. Our teacher, Derek Mitchell, took the time to explain who the characters are, what the ensemble is feeling and experiencing as they hear the words of Alexander Hamilton, what is like to be moved by this group of revolutionaries and how each movement speaks to those emotions.  Derek also took the time to discuss the current political climate, how this particular song and this musical as a whole are relevant. I was moved to tears twice that afternoon. I felt the true overlap of where I am emotionally and mentally and where we are politically. Those thoughts and themes came together beautifully.

Derek explained the concept of ensemble in a way that struck a chord. He said that an ensemble is part of the scenery; individuals are not supposed to stand out. Too often, I have experienced competitiveness and showboating in dance communities.  There’s nothing wrong with being pushed to be at your best or wanting to shine. But I have a problem with environments that promote cliquishness, feed drama and create rivalries, conflict, and dissension. I want to be part of an ensemble, of a community where I am part of a greater whole, dancing for the greater good. Getting out there, shaking your thang, and having a good time is fun. But it is empowering to be part of a diverse group of people sending a powerful message about fighting for freedom and the right to be ourselves.

There was a section of the “My Shot” workshop that called for improvisation. Derek stated that so many of us show up, physically present, but we hide in the back row. It rang true for me. If you look at photos, I’m always in the middle or the back. I shy away from being in the front. I need to be more comfortable pushing myself. I was nervous about improvising a solo. He encouraged us by reminding us it was our moment and asked how we, as individuals, were going to contribute to make our country great.  In that improv, I was a school principal, a samba dancer, a writer, a mother, and a proud mujer. I felt powerful, beautiful, and worthwhile. It was exhilarating.

This day of dance illustrates what it is I have been seeking.   I am seeking opportunities that are positive, cooperative, and collaborative. I am grateful to my samba workshops through the Samba Queens Academy, to BAFM, and to the Hamilton workshops for the new opportunities. I am in a different place as a dancer and it feels wonderful.  I’m committed to continuing my growth in ways that promote my evolution and joy. #summerofdance