“A mother is a person who seeing there are only four pieces of pie for five people, promptly announces she never did care for pie.” – Tenneva Jordan
I have given up pie recently.  I don’t mean the holiday variety; I’m quite sure I will indulge in a slice or two.  In the last few months, I have passed on activities and events that I would not have missed in recent years. It’s not the blues or penance. It simply is a choice, one made for family. 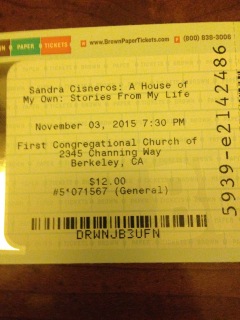 The most striking example was opting out of a reading and book signing by my idol, Sandra Cisneros. I bought my ticket and her new book in advance.  I began planning what I might wear, what I might say.  Would I be brave and ask for a photo?  Would I make it on time on a Tuesday after work?  Tuesday happens to be our busiest weekday. M has cheer practice and competitive dance team practice.  I had made arrangements for her transportation with my folks; Rambo would handle homework and bedtime.  The Monday before the event, I was chatting with the attendance clerk at work. We got to talking about kids. While her children are in their twenties, we could definitely relate to one another on the frustrations of being working mothers. Then she made a comment about bathtime, how she had read that it and other everyday routines were the best times to be family.  I thought about that conversation many times. On the drive home from work the following day, I called my mom and said I would make it to get M from practice and that I would be driving her to dance. I was home with M for bathtime. I don’t remember what I discussed with M but I know I smiled the rest of the night. Mija has that effect on me.
I have chosen family outings and gatherings over samba class on Sundays for the last 12 weeks. I have made only one Sunday tea dance in the City since it debuted three months ago. This weekend I would have been on retreat but my godson played in his first soccer tournament and we are honoring my Tio’s death anniversary at Mass today. I have always taken pride in how much I do for myself.  Now I am doing for my family fully and willingly. It is a change I embrace. After all, I am a mujer ever evolving.