It began when I ran across a Vogue fashion spread about Frida-inspired fashion. Because M and I were attending a Frida birthday celebration in San Jo, I was researching Frida in popular culture as a counterpoint.
Once again, Kermit ended up sipping tea because an expensive outfit couldn’t possibly capture the artistry of Frida(or any artist for that matter.)
Two weeks later, a friend’s Facebook post caught my attention. http://www.someecards.com/life/fashion-beauty/allure-afro-white-appropriation/
I read and posted the article about the responses to an Allure photo shoot onto my timeline.  The Allure photo shoot was more culture vulture nonsense.  Sure, I rolled my eyes and sighed deeply. But I needed to discuss, if only online. I decided to share it on my Facebook timeline because I knew my friends would respond as I had. Mujeres en la lucha, warrior women analyzing and strategizing, commiserating over cultural appropriation as we do other issues that affect us. 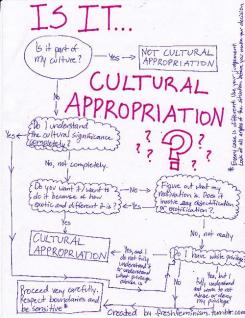 Then, an acquaintance, an older white woman I know through a TV show on which I occasionally appear, joined the online discussion with a statement that made no sense and offended everyone who came across it:
If I were black, I’d much rather wear afro hair instead of plastering it down where it looks all greasy and dirty….
She engaged in ongoing arguing with many of my friends and refused to apologize. She exited stage left:  African American women are always offended ….. I said nothing discriminatory. Goodnight Ladies..

It was too much. It weighed on my mind for days. On Wednesday, already upset that I couldn’t rejoin my beloved human rights education institute due to work obligations, I couldn’t get it together to make it to work in the morning. Why give this situation and this ignorant person that power? Why pay this fool any mind?
I was equally angry with myself for not taking her on publicly. For not cussing her out. I’m sick of taking the high road, of handling situations with professionalism, of being grace under pressure. I can’t. No puedo.
Online, I have cut off communication with this person. I sent her a terse inbox message, unfriended and blocked  her. We will likely never cross paths again. But she won’t be the last person to test me and those I love in this way.